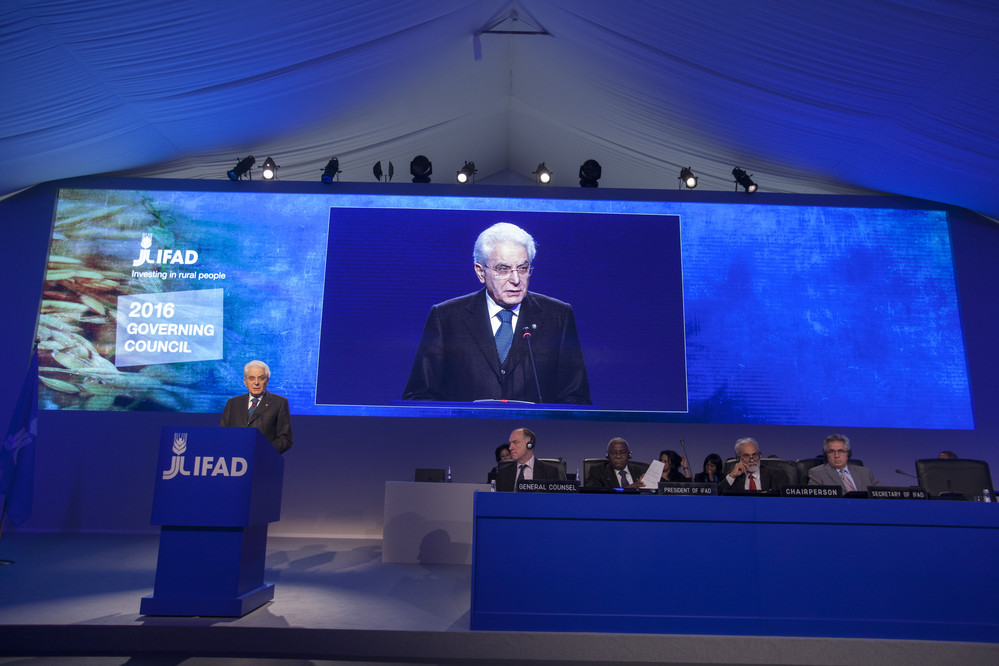 Sergio Mattarella, the President of the Italian Republic speaks at the opening of IFAD Governing Council. ©IFAD/Giulio Napolitano

Rome, 17 February 2016 – Development leaders, heads of state and government representatives gathered for the opening of the 39th Session of the Governing Council of the International Fund for Agricultural Development (IFAD) to explore ways of boosting investments in smallholder agriculture that are essential to achieving the Global Goals of ending poverty and hunger.
In his opening statement, Sergio Mattarella, the President of the Italian Republic, said investing in smallholder agriculture in developing countries was a cross-cutting issue that helps to stabilize communities and countries and reduce migration and conflict.
“Agriculture plays a fundamental role,” said Mattarella “You achieve the means to feed families, support forms of social organization, preserve land and biodiversity, fight against climate change, create jobs and prosperity, contribute to stable and just societies and, most importantly, eradicate the root causes that push more people to emigrate.”
Speaking more specifically about the increased number of refugees fleeing the conflict in Syria, Mattarella added that “hunger and poverty are insidious and are at the root of conflict and instability and are the link in the chain that we need to break first to deal with emergencies and humanitarian disasters.” 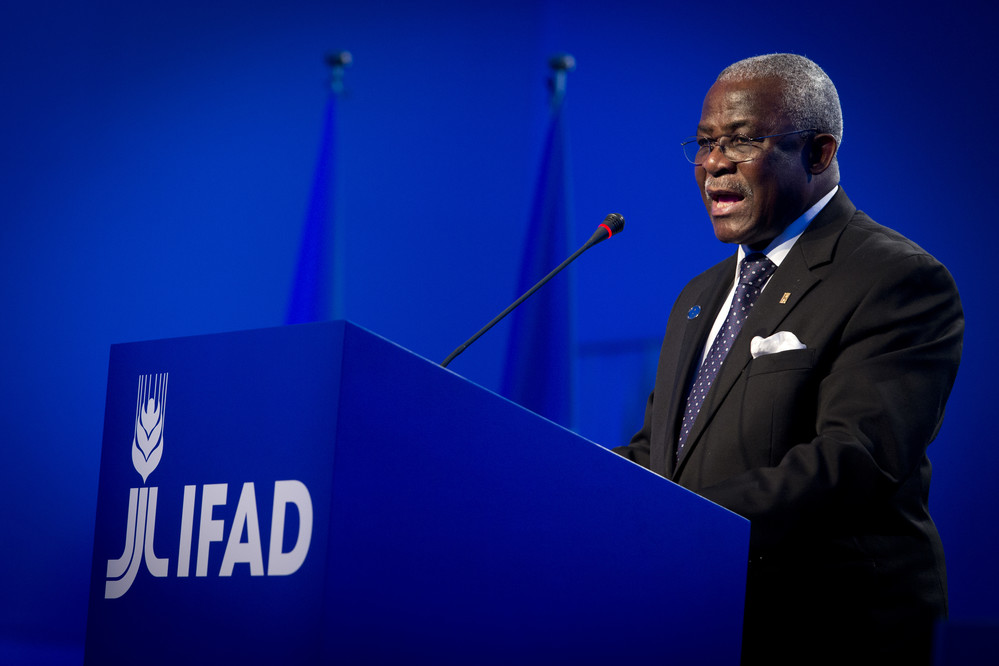 IFAD President, Kanayo F. Nwanze further underlined the urgency in his statement, adding that in addition to terror threats and mass migration, drought is worsening in southern Africa where nearly 14 million people are now in danger of going hungry.
He stressed that although governments are faced with competing priorities in addressing emergency situations, they cannot afford to lose focus on long-term development.
“We face the very real risk of seeing reversals in the development gains made in poverty and hunger in recent years,” Nwanze said.
He added that Agenda 2030 – the worlds new 17 Global Goals – call for nothing less than the creation of prosperity, health and security for all while protecting the planet over the next 15 years.

“The agenda and deadline are ambitious because we no longer have the luxury of time. We must take action now,” he told governors representing IFAD’s 176 member states attending the annual conference.

Around 3 billion people live in the rural areas of developing countries. They account for about 40 per cent of the world’s population yet they represent more than 70 per cent of the world’s poorest and hungriest. Most depend on agriculture for their lives and livelihoods. Focusing attention on poor rural people, particularly smallholders, is key to achieving SDG1 to end poverty and SDG2 to end hunger.
As currently witnessed in southern African, one of the greatest threats to food production is climate change.  IFAD has been well ahead of the curve in developing a climate change strategy that dates back to 2010, and includes the creation of ASAP – the Adaptation for Smallholder Agriculture Programme – which now assists farmers in developing countries around the world adapt to changing climatic conditions.
In his opening address, Nwanze extended a special thanks to the representatives of farmers’ organizations who took part in the sixth global meeting of the Farmers’ Forum, held in conjunction with IFAD’s Governing Council on 15 and 16 February.
IFAD’s Governing Council meeting concludes on Thursday 18 February with the IFAD Lecture Series, this year delivered by Dr. Mohamed Ibrahim, globally recognized entrepreneur and founder of the Mo Ibrahim Foundation.
By SDGsACT Campaign|2016-02-19T13:28:00+00:00February 19th, 2016|Uncategorized|