Africa’s Economic Future Will Be Cultivated On Small Family Farms

Africa’s Economic Future Will Be Cultivated On Small Family Farms 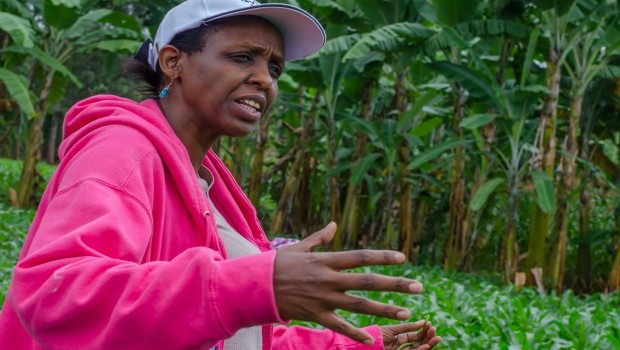 Agnes Kalibata during one of AGRA field visits (image: AGRA) –
By Agnes Kalibata
This week I joined more than a dozen of the world’s sharpest minds on African agriculture in an unprecedented effort to devote an entire issue of the influential magazine Foreign Affairs to consider the future of the African farmer in our digital age.
I wanted to establish one simple fact: agriculture is poised to drive a new era of inclusive economic growth for Africa—but only if we focus on the small, family-run farms that are Africa’s main source of employment and produce the majority of what Africans eat.
The opportunity is clear. Africa’s growing population and expanding middle class are creating a domestic market for food products that will be worth $1 trillion by 2030. But to tap this opportunity for Africa’s smallholder farmer, we need to stop thinking about them as subsistence growers and embrace their potential to generate income.
The very word subsistence implies a struggle to survive, not an effort to build a business that thrives. That’s why no child of an African subsistence farmer wants to be a farmer. For the most part they remember farming as a trade that kept them poor, because for the majority of Africa’s farmers, agriculture is a classic poverty trap. Subsisting becomes a full time job. But African farms are fully capable of becoming profitable businesses.
Today, most farmers produce a fraction of what their lands can yield, mainly because they are not using improved seeds or fertilizers. In Uganda, for example, 87 percent of smallholder farmer use saved grain as seed, even though there are new varieties thatcould quadruple their yields.
One reason for their reticence to purchase new seed is that most African farmers operate in anenvironment that always has them on the verge of destitution. It’s true that many lack access to yield-improvingfarm inputs, including seeds, fertilizers, and information. But more importantly, they rely on saved seeds because they know how they will perform. They cannot afford to gamble the unknown.
Many African farmers also wonder why they should invest in boosting production when they lack access to markets where they could sell their surplus.  In the Democratic Republic of the Congo, the eleventh largest country in the world by geographical area, there are fewer than 1,500 miles of paved road, about what you would findin a middle-sized American city.And when African farmers do managed to get their produce to market, theyoften fail to get a fair returnbecausethey lack insights into commodity pricing.
So how do African farmers, a huge constituency that comprise 70 percent of our population, get beyond subsistence? For starters, national governments and the development community can empowerAfrican farmerswith more options in seeds, fertilizers and market opportunities.
The good news is that over the last decade we have learned a lot about the local seed and soil needs on African farms. And we have seen many organizations intensify their efforts, including plant breeders at the CGIAR centers and soil experts at the International Fertilizer Development Center. Also, new efforts, like the African Fertilizer and Agribusiness Partnership (AFAP), are providing fertilizer blends suited to specific soil conditions. And there are innovative ways to scale up these solutions.
In parts of Kenya, Tanzania, and Mozambique, there are NGOs and private sector partners linking smallholder farmers with trusted local people who provide seeds, fertilizer, and other supplies—and the training in their proper use. Adoption rates are as high as 70 percent because, if given a chance to test them, farmers are willing to pay for inputs.
Digital innovations also are accelerating the shift to market-oriented agriculture. More than 750 million rural Africans already use mobile phones, which is why Nigeria now delivers seed and fertilizer vouchers directly to farmers through their phones. In its first year alone, the program reached 1.7 million farmers and helped them produce an additional 8.1 million metric tons of food.
When I took office as Rwanda’s agriculture minister, I knew Africa’s food problems were caused not by African farmers but by our own shortcomings in offering them solutions. We embraced policies that addressed their challenges and between 2005 and 2014, two million Rwandans (20 percent of the country’s population) lifted themselves out of poverty. Average annual income rose from less than $250 to almost $650. The World Bank attributed 65 percent of this increase to growth in the agricultural sector.
We didn’t get everything right in Rwanda. And yet, Rwanda’s commitment to smallholder agriculture shows what’s possible.
Now we need to see this kind of commitment spread across Africa. Give our farmers the opportunity to prosper and they can cultivate a promising economic future that delivers benefits for all Africans.
Agnes Kalibata is the President for the Alliance for a Green Revolution in Africa (AGRA) and the former Minister of Agriculture for Rwanda. A longer version of this piece was published in a special issue of Foreign Affairs Magazine on February 15.
– See more at: http://afkinsider.com/119379/opinion-cultivating-africas-economic-fortunes-on-the-family-farm/#sthash.cfQZNtUO.dpuf
By SDGsACT Campaign|2016-02-16T13:12:00+00:00February 16th, 2016|Uncategorized|