Female Genital Mutilation: Ending the scare of a lifetime

Home/Uncategorized/Female Genital Mutilation: Ending the scare of a lifetime

Female Genital Mutilation: Ending the scare of a lifetime 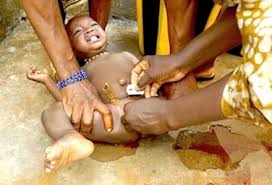 The day Folake, 13, was circumcised, she had no idea what was about to happen. She had gone to bed the previous evening only to be woken in the dead of the night by a loud bang on the door of the room where she and her 10-year-old sister slept. The room was in inky darkness as the door crashed open and before Folake could move, she felt a large hand covering her mouth and nose while another strong hand lifted her off the bed and dragged her out of the room into the passage. Genital-mutilation In shock and unable to protest or wriggle free, Folake heard her sister screaming in the background, but under the pale, moon-lit night, as she was dragged out of the back door into the compound and onto the footpath leading to the main road, she quickly became aware of some figures standing by the house. She recognized one of those figures as her mother’s and made a vain attempt to call out to her.
She was surprised that her mother made no move to rescue her from the assailant. Tears came to her eyes when she heard her mother whisper “Folake, you are going to be cut. It’s your turn.” The rest of the events after that went by in a blur. Folake practically passed out as a result of the choking grip on her mouth and nose. When she came to life, she found herself naked and spread-eagled on the floor in an unknown room. A candle burned unsteadily nearby as she struggled hopelessly to get up, but was pinned onto floor by four women. A fifth woman knelt between her legs, bent over her lower abdomen with a razor blade in her right hand , urged her to stop struggling. “You won’t feel it. It’s not going to be painful, the woman remarked. But Folake felt it. As her flesh was being cut off, white-hot pain enveloped her entire being. The pain was more intense than she ever imagined. She bled a lot. For many days thereafter, she was in agony. She felt abused, violated and disenchanted. Why, why? She kept asking. But there were no answers. She had gone through Type 3 form of Female Genital Mutilation and Cutting and did not know why.
Slowly she healed and time passed. She thought her ordeal was, but only became aware of how much she’d been affected psychologically and physiologically when she fell pregnant. Folake was severely depressed and hated being vaginally examined. It was her worst nightmare. Her Gynecologist could not understand why she was so averse and so scared? Folake did not know it, but her body was experiencing flashbacks—a reminder of what had happened to her when she was 13.
There are millions of girls and women like Folake that are victims of FGM/C. Today, February 6 is the International Day of Zero Tolerance for Female Genital Mutilation and Cutting, FGMC. The day is an awareness campaign to end the harmful practice that violates girls’ and women’s rights.
The World Health Organisation, WHO, describes female genital mutilation and comprising all procedures that involve altering or injuring the female genitalia for non-medical reasons. The practice is recognized internationally as a violation of the human rights of girls and women. In Nigeria and some other parts of the developing world, this practice has been described as reflecting deep-rooted inequality between the male and female sexes, and constituting an extreme form of discrimination against women and girls. The practice also violates their rights to health, security and physical integrity, their right to be free from torture and cruel, inhuman or degrading treatment, and their right to life when the procedure results in death. Although the practice of FGM cannot be justified by medical reasons, in many countries it is being executed more and more often by medical professionals, which constitutes ones of the greatest threats to the abandonment of the practice. 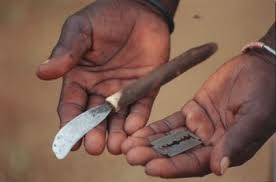 A recent analysis of existing data shows that more than 18 percent of all girls and women who have been subjected to FGM have had the procedure performed by a health-care provider and in some countries this rate is as high as 74 percent. The situation of FGM/C in Nigeria according to NDHA 2013 reveals that due to its large population, Nigeria has the third highest absolute number of women and girls (19.9 million) who have undergone FGM/C worldwide (after Egypt and Ethiopia). In it’s clinical description of FGM/C, the WHO describes it as comprising four types:
Type 1: Clitoridectomy: partial or total removal of the clitoris and, in very rare cases, only the prepuce (the fold of skin surrounding the clitoris).
Type 2: Excision: partial or total removal of the clitoris and the labia minora, with or without excision of the labia;
Type 3: Infibulation: narrowing of the vaginal opening through the creation of a covering seal.
Type 4 (Unclassified): all other harmful procedures to the female genitalia for non-medical purposes, e.g. pricking, piercing, incising, scraping and cauterizing the genital area. 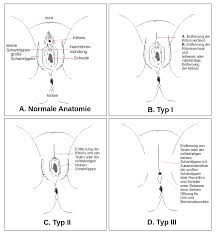 The National President, Inter-African Committee on FGM, Professor Modupe Onadeko, argues that the sensitization against FGM/C is now in the nurses’ curriculum at the University College Hospital, UCH, Ibadan, observes that we should not allow even one girl to be mutilated again. Onadeko who argues that female circumcision is not the equivalent of male circumcision, said globally it is a violation of the girl child and the woman and has drawn criticism because of the hazards of health and complications.
“Female Genital Mutilation/Cutting has been with us for a long time. It is an accepted practice in so many cultures, and it has been justified as to why it should go on, as the rites of the passage for preparing a girl to womanhood. “I have researched and have not come across one good that comes out of FGM/C but there are numerous disadvantages.”
Data from NDHS 2013, shows that 27 percent women 15-49 have been cut. It happens mainly before the 8th day or early teenage, during labour. An estimated 19.9 million Nigerian women have undergone FGM/C meaning that approximately 16 percent of the 125 million FGM/C survivors worldwide are Nigerians. Programme Officer, UNFPA Nigeria, Damilola Obinna, notes that there are three sorrowful milestones for the girl child—the day of circumcision, the wedding night (the fear of painful sexual intercourse) and the day she would be having her baby. We need to stop this practice. Studies show that FGM/C is more prevalent in the southern zones than in the northern zones. States with the highest prevalence include
Osun (77 percent),
Ebonyi (74 percent) ,
Ekiti (72 percent ),
Imo (68 percent ) and
Oyo (66 percent).
There is a Federal law outlawing the practice of FGM/C in Nigeria, the Violence Against Persons (Prohibition) Act (VAPP), 2015, the practice continues. Eight states of the Federation have laws prohibiting FGM/C viz:
Lagos,
Osun,
Ondo,
Ekiti,
Bayelsa,
Edo,
Cross River and
Rivers.
The Child Rights Act (CRA) 2004 also prohibits FGM/C Reasons adduced for continuation of the practice range from tradition to preserving and continuing a set of values and rituals in a community, rite of passage from girlhood into womanhood, etc. Child Protection Specialist, UNICEF, Maryam Enyiazu, FGM/C says is performed in Nigeria for cultural aesthetic reasons. In some communities, normal female genitals are considered ugly, unclean and unattractive unless they are subjected to FGM. She says in some communities, it is believed that the clitoris contains powers strong enough to damage a man’s penis or to kill a baby during childbirth. Solely focusing on the medical reasons has not helped. Medicalisation leads to legitimisation of the practice. But with collective support, FGM/C can be abandoned in this generation. 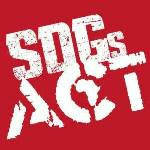 That is the message today and every day